I Haven't Forgotten That This Exists

I just finished this semester about a week ago; I got a C in both my stupid-kid's-math class, and also in English. I'd say that's pretty good, considering I probably went to about half the math classes and did less than half of the English homework (save bigger projects like essays, though those were always put off until the last minute). So good job, me! Next semester I'm signed up for I-forget-what. I think marine biology, a history class, and...something else. Possibly art 101? My goal is to get all my GE done by the end of next spring, but I still need to talk to a counselor to make sure that is actually a possibility and there aren't any other things they need to sneak on me. Once that's done I don't know where I'll transfer to. I've thought about SJSU, SFSU, and CSULB, among others. But I need to decide on a major first, and then I can decide on a school. Things I've been rolling around in my mind major-wise: something film/video editing related, music, or something English-related. Brandon is amazing. He's 100% supportive in whatever I choose. :)

Speaking of him, last week was our six-months-married mark, and we went to the Monterey Bay Aquarium to celebrate! My favorites were the penguins and sea otters, like every other girl in the galaxy, but I also really liked petting the bat rays. They were all cute and slimy. Brandon was a fan of the leafy sea dragons, which are a type of sea horse: 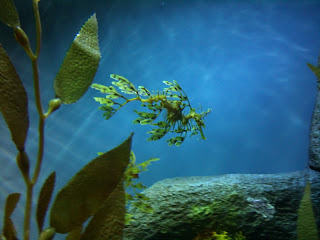 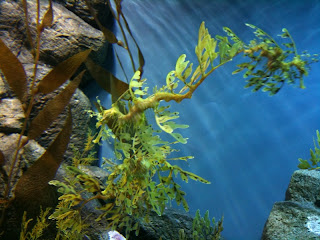 It was nice and refreshing being able to go out like that; usually we just watch Netflix and hang around the apartment, though I've been reading a lot, lately. Within the last month or so I read the first Percy Jackson book (very predictable), Stardust (quite different from the movie), Diary of a Wimpy Kid (I couldn't help myself), and now I'm a majority of the way through Anne Frank's diary (I've never read it before). It won't be long before I'm done with this one now, and I need to pick a book to read afterwards. There's lots on my shelf to choose from, but if you have a suggestion I'm all for it!

So far we have no plans for summer, except for that Brandon will be working full time, and during the first week of August the plan is to go to Oregon with my parents to visit my aunt. This same aunt was just in town this last weekend, and we babysat her kids while she went to see Iron Man 2 with her husband on Sunday. 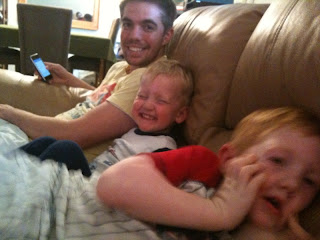 Aren't they cute? Brandon is fuzzy because he's in a beard-growing competition with some co-workers. I think he's winning.
Penned by Toni Lynn at 4:24 PM

Toni Lynn
I'm an Apple nerd and a recently converted shutterbug, and I'm married to the most amazing man!